Menu
Log in
Register
You are using an out of date browser. It may not display this or other websites correctly.
You should upgrade or use an alternative browser.

“Thank you to all our customers,” said Daniel Pearson, COO of KnownHost LLC. “Without them allowing us to try to improve our services and to afford us with the opportunities to strive to offer the best customer experiences, we wouldn’t be able to receive this award.”

On Review Signal’s blog, founder Kevin Ohashi wrote: “It’s always interesting to look back at a year and analyze what happened.” He further explains that KnownHost surpassed A Small Orange, an incumbent from last year, to receive its recognition in this year’s lineup.

Demand for industry services continues to grow. A recent article on TheWhir.com cited a new survey showing that 64 percent of companies will spend more on public cloud infrastructure in 2015. KnownHost has continued expanding to support the growth and has datacenters in Maryland, Texas and Washington serving customers in over 150 countries. It now monitors 306 physical servers for its managed products.

This award announcement from KnownHost comes on the heels of a complimentary upgrade it rolled out for each of its Managed VPS and Managed SSD VPS customers about two months ago, which included complimentary increases in RAM, disk space and bandwidth for all Managed VPS Hosting plans.

In addition, the company has also released a new SSD-5 plan for higher-end use to meet increasing customer demand for super-fast Solid State Drives. Also, a new Dedicated Server lineup is being provided, including four new ones scheduled to be fully-online by the end of March this year.

KnownHost holds the number-one web host spot among the HyperSpin rankings for reliability and uptime. KnownHost achieves a 99.989% uptime ranking, well-exceeding the 99.5% benchmark that HyperSpin considers to be a reliable web host, and its sister provider, RocketVPS, ranks number-one in uptime for scalable unmanaged hosting services, with a 99.996% uptime ranking.
Last edited by a moderator: Sep 8, 2017

Congratulations to Known Host!
Hard work, dedication, and truly caring about your customers pays off!

Awesome! Glad you're getting the recognition you deserve. 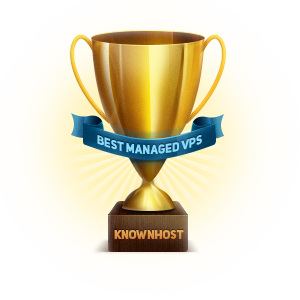